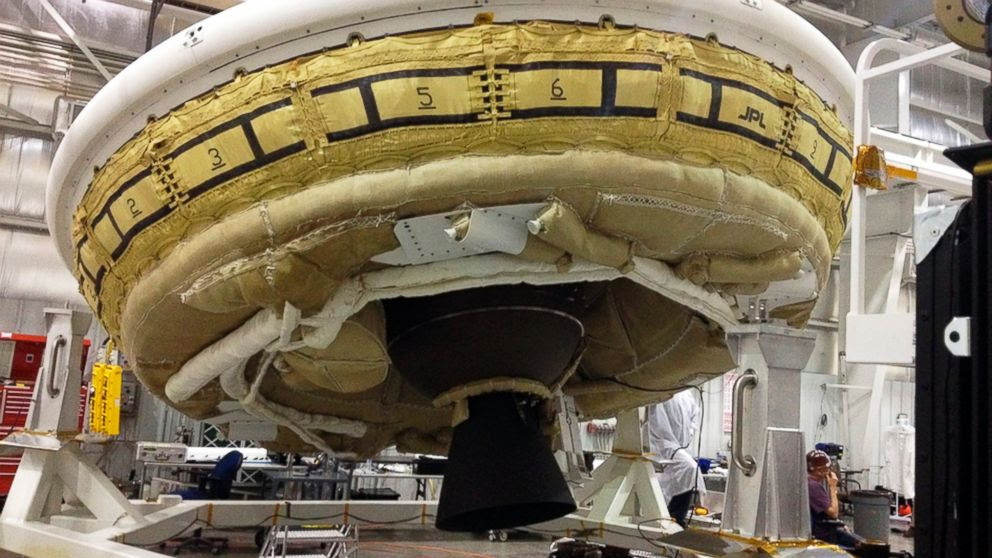 By CHRISTOPHER WEBER Associated Press  Jun 27, 2014
A saucer-shaped test vehicle known as a Low Density Supersonic Decelerator holding equipment for landing large payloads on Mars is shown in the Missile Assembly Building at the US Navy's Pacific Missile Range Facility at Kekaha on the island of Kauai in Hawaii, in this undated file photo.
NASA/AP Photo
A saucer-shaped NASA vehicle testing new technology for Mars landings has made a successful rocket ride over the Pacific but its massive descent parachute only partially unfurled.
The Low Density Supersonic Decelerator was lifted by balloon 120,000 feet into the air from the Hawaiian island of Kauai on Saturday.
The vehicle then rocketed even higher before deploying a novel inflatable braking system.
But control cheers rapidly died as a gigantic chute designed to slow its fall to splashdown in the ocean emerged tangled.
Still, NASA officials say it's a pretty good test of technology that might one day be used to deliver heavy spacecraft — and eventually astronauts — to Mars.
NASA plans a news conference on the flight Sunday.
Posted by Pappy at 9:04 PM