This is "just" above Philadelphia.....I'm surprised the water was clear enough to see it

The manatee on the Delaware River Tuesday,
Credit: New Jersey Division of Fish and Wildlife
A manatee, also known as a sea cow, was spotted in the Delaware River Tuesday afternoon.
The large animal was spotted by a New Jersey resident in Bordentown, across from the old US Steel facility in Falls Township, Tuesday afternoon. New Jersey Division of Fish and Wildlife spokesman Larry Hanja confirmed that a conservation officer confirmed the sighting and captured an image of the manatee by the I-295 bridge.
Pennsylvania Fish and Boat Commission Captain Ray Bednarchik told LevittownNow.com his office was not aware of the manatee and had not taken any reports of it. However he did note, while it would be rare that a manatee would be in the Delaware River, it is not unheard of.
“The fact of the matter is he likes New Jersey better than Pennsylvania,” Hanja joked. “He’s headed to the shore next.”
The large aquatic mammals, who can weigh up to 1,300 pounds, sometimes make their way north of the natural habitat of Florida and Georgia when northern water becomes warmer like it has recently, said US Fish &  Wildlife spokesman Chuck Underwood. 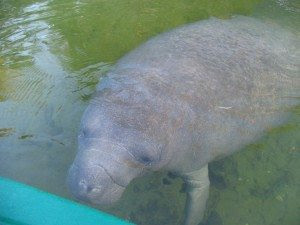 A young manatee in a file photo.
Credit: Wikimedia


The manatee is likely younger and looking for food, Underwood said. Manatees are known to eat almost plant life exclusively.
“I’m going to say that he hopscotched up the coast and went into different estuaries until he made it up near Trenton,” Underwood, who is based in Florida, said.
An officer from the New Jersey Division of Fish and Wildlife searched the river Wednesday morning for the manatee but did not locate it.
Underwood said another manatee has been sighted along the Jersey Shore, but he did not have further details on that animal.
Hanja said no other manatees have been reported in the Delaware River.
Federal officials might intervene if the manatee remains in the Delaware River as temperatures start to drop off in late summer, Underwood said.
“He’s fine where he is right now.”
Posted by Pappy at 6:44 PM