O K Guys, you can take a bullet, get blown up or if captured be beheaded, BUT, you can't smoke those filthy cigars....they are dangerous to your health
Now the bureaucrats think soldiers shouldn’t be allowed to get cigars. 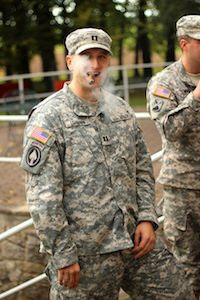 The Wall Street Journal has the details of this silly nanny-state intervention.
You might think GIs in Iraq and Afghanistan have enough to worry about with Islamic State and the Taliban. But it turns out they’ve also got a problem called the Food and Drug Administration. In August a new FDA rule went into effect that forbids tobacco makers and distributors from handing out free samples. Some companies that have been donating cigars to service members for decades have now stopped for fear that this is now illegal. The FDA nuttiness has attracted the attention of Rep. Kathy Castor, a Democrat who represents Florida’s 14th district, which includes “Cigar City,” or Tampa. She has introduced a bill to “reinstate the tradition of donating cigars to our military members to provide them with a taste of home while deployed.” Her press release notes that cigars are the “second-most requested item” from troops overseas. …cigars for service members is in question because it’s a proxy for the political war on tobacco, but the first casualty is common sense. The FDA’s bureaucrats are happy to have U.S. soldiers, sailors, airmen and Marines dodge bullets overseas but they’re horrified they might relax by lighting up a stogie.

But the nanny-state war against soldiers enjoying cigars is downright trivial compared to the deadly impact of the FDA’s attack on vaping.