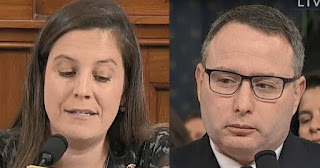 Elise Stefanik just dropped the hammer on the hapless Democrats with a withering opening statement that should put this whole debacle to bed. She got the Dems star witnesses to admit corruption was a key issue in Ukraine. She got them to admit in 2014 the Obama administration looked into corruption at Burisma, just as Trump did in 2019. She then hit Adam Schiff with his own petard saying he is refusing to call Hunter Biden and that damages the credibility of the investigation.She got them to admit that any aid given to Ukraine requires the USA to sign off an anti-corruption initiative showing Ukraine is not corrupt before they get the aid. She got them to admit it is, in fact, a law that we do so. She then dropped the hammer and reminded everyone the president, not the staff sets the policy for this great nation. She read out how many times Vindman said “I” during his testimony implying he thought he was in charge of Ukraine policy not POTUS.