Trump Declares Impeachment 'Over' In Fiery Statement 2019-11-20 by: TTN Staff 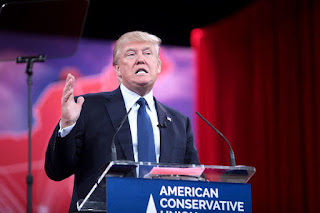 President Trump slammed the Democrat led impeachment inquiry and declared it 'over' in a fiery statement to reporters.

The President's remarks came after Ambassador Sondland gave his testimony before congress.

As The Hill reports:

President Trump on Wednesday said that he didn’t know U.S. Ambassador to the European Union Gordon Sondland “very well” and that Sondland's ongoing testimony Wednesday means that the House impeachment inquiry should be “over.”

Reading from a packet of notes, Trump reenacted a conversation he had with Sondland that was described in testimony, with the president saying he wanted “nothing” from Ukraine in exchange for investigations.

“Here is my response that he just gave. Ready? You have the cameras rolling? I want nothing. That’s what I want from Ukraine," Trump continued.      "I want nothing — I said it twice."
Posted by Pappy at 8:02 PM