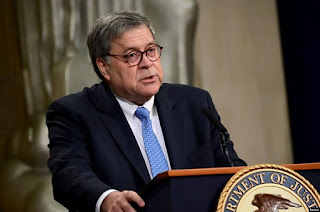 President Trump and his allies are swinging back against the Democrats’ impeachment witch hunt.

Liberals had no idea what hit them.

And William Barr stood up and told this truth about impeachment that had Nancy Pelosi ducking for cover.

In his remarks, the Attorney General implied the current impeachment witch hunt was nothing more than the latest step in the left’s unyielding assault on the legitimacy of the 2016 Presidential Election.

“Immediately after President Trump won election, opponents inaugurated what they call ‘The Resistance’ and they rallied around an explicit strategy of using every tool and maneuver to sabotage the functioning of the executive branch,” Barr explained.

Attorney General Barr went on to debunk the fake news lie that it is Donald Trump that is destroying constitutional norms.

“The fact of the matter is that, in waging a scorched earth, no-holds-barred war of ‘Resistance’ against this Administration, it is the Left that is engaged in the systematic shredding of norms and the undermining of the rule of law. This highlights a basic disadvantage that conservatives have always had in contesting the political issues of the day. It was adverted to by the old, curmudgeonly Federalist, Fisher Ames, in an essay during the early years of the Republic,” Barr declared.