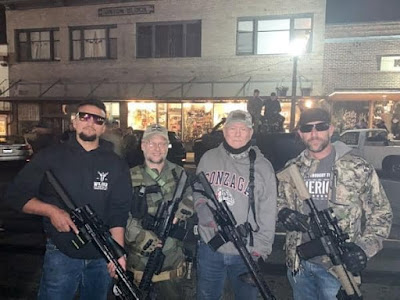 Times like these are just one reason why the second amendment is critical to keeping the peace and protecting our loved ones and property. This is the true face of America when push comes to shove. This pic was last night in another state. But it’s message is universal to all red blooded patriots.

Protect and defend this constitution against all enemies (at all times) both foreign and domestic.

“Late night tonight defending my little town of Snohomish from rioting and looting by antifa thugs. Once we got word they were on their way a thousand concerned citizens showed up, heavily armed. Not a single store was damaged and no one was hurt. Antifa showed up in little groups, saw everyone was armed and waiting, and they decided to move on. I love Snohomish County.“
Robert J.Southerland
Posted by Pappy at 4:23 PM