There have been pictures from states all around the country of pallets of BRICKS. You can't tell me NO ONE has witnessed them being dropped off . Unless they are being unloaded onto the pallet by hand, these pallets would require a truck mounted small crane or a fork lift to unload them... 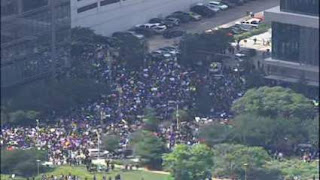 HOUSTON – The Houston Public Works is asking residents to report any suspicious activity after removing several piles of bricks and rocks in Houston.

Officials said the bricks and rocks may have been intended to cause destruction during Tuesday’s demonstrations in the city.

Houston Public Works asks residents to call 311 or the Houston Police Department non-emergency line at 713-884-3131 to report any suspicious activity or if you see someone leaving these items in the community.

Officials will dispatch a crew to immediately remove the piles of items that may be used to threaten the safety and security of the citizens of Houston.
Posted by Pappy at 11:54 AM