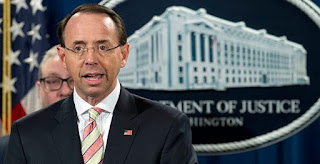 Well, it’s former Deputy Attorney General Rod Rosenstein’s day to testify before the Senate Judiciary Committee about the Russian collusion fiasco. And it’s not going very well. Well, for starters, Rosenstein doesn’t feel that disgraced ex-Deputy FBI Director Andrew McCabe lied to him. McCabe was fired because he lied. He, like Robert Mueller, also appeared to put the second act of this clown show on autopilot. As Sen. Ted Cruz (R-TX) said, Rosenstein was either incompetent or complicit in this whole witch hunt.
He also said that knowing what he knows now, he would not have signed off on the FISA warrant against former Trump campaign official Carter Page. On that front, The Federalist co-founder Sean Davis noted that Rosenstein might have committed perjury. He said he read the warrant, but later when pressed by Cruz, he pretty much admitted that he didn’t “read” it per se.