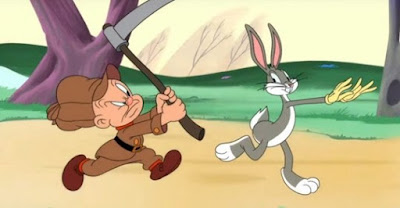 Looney Tunes Cartoons, the new series of animated shorts released exclusively on the HBO Max streaming service, will not be "doing guns," says series executive producer and showrunner Peter Browngardt. A throwback to the Looney Tunes cartoons of the 1930s and 1940s — bringing back classic pairings like Bugs Bunny and Elmer Fudd, Tweety and Sylvester, and Daffy Duck and Porky Pig — the zany cartoon violence depicted in Looney Tunes Cartoons will continue with anvils, dynamite, and other weapons as part of the 1,000-plus minutes of all-new animation taking a cartoonist-driven approach to its simple, gag-driven storytelling.

"We're not doing guns," Browngardt told The New York Times. "But we can do cartoony violence — TNT, the Acme stuff. All that was kind of grandfathered in."

Unlike Cartoon Network's since-cancelled The Looney Tunes Show, styled after a sitcom, Looney Tunes Cartoons doesn't do scripts — before COVID-19, cartoonists gathered in a room together to draw pictures and gags — focusing instead on simple concepts and gut-busting gags.

"Some of them have maybe gone a little too far, so they might come out in a different format," Browngardt said, adding some of those more extreme shorts could be released "packaged for an Adult Swim type of thing.

Added story editor Johnny Ryan, the cartoons are both timeless and not of this time. "We're going through this wave of anti-bullying, everybody needs to be friends, everybody needs to get along," he said. "Looney Tunes is pretty much the antithesis of that. It's two characters in conflict, sometimes getting pretty violent."

Dopey hunter Elmer Fudd is traditionally depicted using guns to hunt wabbits — namely archenemy Bugs Bunny — including classic shorts A Wild Hare and Rabbit Fire, where Daffy Duck accidentally shoots himself in the face while fumbling with Fudd's seemingly unloaded weapon. The hot-tempered Yosemite Sam is another adversary traditionally quick to pull the trigger on a pair of guns not present in the new show.

In Looney Tunes Cartoons, Fudd can be seen continuing his endless pursuit of the wascally wabbit with other weapons, including a scythe.

"I always thought, 'What if Warner Bros. had never stopped making Looney Tunes cartoons?" Browngardt said of the approach to the new series. "As much as we possibly could, we treated the production in that way."


Disclosure: ComicBook is owned by CBS Interactive, a division of ViacomCBS.
Posted by Pappy at 7:51 PM