" Obama said as he bid farewell to his audience. "And we should all be thankful for folks who are willing, in a PEACEFUL, DISCIPLINED WAY, to be out there making a difference. 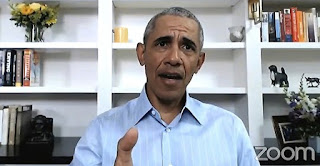 Venturing further into the public discourse he had largely held back from since relinquishing the Oval Office to President Trump, former President Barack Obama joined a virtual town hall Wednesday to advocate for the kind of hope and change that once inspired a nation to twice elect him as its leader.

"We have seen in the last several weeks, last few months, the kinds of epic changes in events in our country that are as profound as anything that I've seen in my lifetime," the 58-year-old onetime community organizer told his unseen, online audience in a Zoom videoconference organized by My Brother's Keeper Alliance, a part of the Obama Foundation.

But Obama was clearly the main attraction.