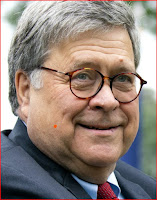 Barr made the remarks in an interview with Wall Street Journal columnist Kimberley Strassel in which he noted that he was “in a position in life where I can do the right thing and not really care about the consequences.”

He reminds me why he took the job in the first place: “The Department of Justice was being used as a political weapon” by a “willful if small group of people,” who used the claim of collusion with Russia in an attempt to “topple an administration,” he says. “Someone had to make sure that the power of the department stopped being abused and that there was accountability for what had happened.” Mr. Barr largely succeeded, in the process filling a vacuum of political oversight, reimposing norms, and resisting partisan critics on both sides.

Mr. Barr describes an overarching objective of ensuring that there is “one standard of justice.” That, he says, is why he appointed U.S. Attorney John Durham to investigate the FBI’s 2016 Crossfire Hurricane probe. “Of course the Russians did bad things in the election,” he says. “But the idea that this was done with the collusion of the Trump campaign — there was never any evidence. It was entirely made up.” The country deserved to know how the world’s premier law-enforcement agency came to target and spy on a presidential campaign.

Mr. Barr says Mr. Durham’s appointment should not have been necessary. Mr. Mueller’s investigation should have exposed FBI malfeasance. Instead, “the Mueller team seems to have been ready to blindly accept anything fed to it by the system,” Mr. Barr says, adding that this “is exactly what DOJ should not be.”