Can we learn SOMETHING from our northern neighbors...??? .."MOLON LABE" 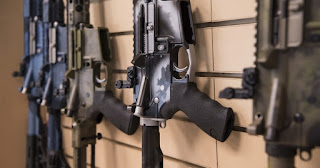 It’s been nearly seven months since Prime Minister Justin Trudeau announced a sweeping ban on semi-automatic firearms in Canada, including a mandate that existing gun owners hand them over to the government in a “buyback”, but Trudeau’s Liberal Party has yet to find a private company willing to oversee the compensated confiscation efforts.

When Trudeau’s public safety minister Bill Blair originally sent out a request for proposal, he received virtually no bids from any company. Undeterred, Blair ended up reaching out to human resources company AltisHR, which signed a $60,000 contract with the Canadian government in October to draft a plan for how the confiscation efforts would be managed.

The public didn’t become aware of the contract until December 7th, when the government responded to a question from a conservative member of Parliament. Once the contract became public knowledge, the firm inundated with messages from polite missives to outright threats, and just a few days later AltisHR announced it was pulling out of the agreement.

That leaves Trudeau’s government in the same place it was back in May when it announced the gun ban and compensated confiscation efforts, which are set to begin in mid-2022; the mandate has been issued, but the anti-gun administration hasn’t figured out a way to handle the confiscation efforts.
READ MORE
Posted by Pappy at 5:35 PM