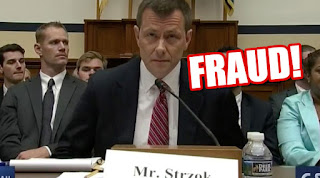 If there were ever clear-cut evidence that the entire Trump-Russia collusion nonsense was a set-up, the media would surely jump to report on it. Correct? Well, we now have it, and the media are still silent.

A whole new set of internal FBI messages from Peter Strzok were declassified by the the Justice Department and then released on Thursday by Congressional Republicans, and it’s a big bag of doozies.

The documents were reviewed by the Daily Caller, which says they are a source of “new insights into the thinking of investigators who worked on Crossfire Hurricane.”

Strzok’s messages, which are from the FBI’s Lync system, also contain numerous references to Christopher Steele, the former British spy whose dossier the FBI used to obtain surveillance warrants against Carter Page. (Mueller Found No Collusion)

One message suggests that Strzok knew early on that Steele was a source for a story published in Yahoo! News alleging that Page had a secret meeting in Moscow with two Kremlin insiders.

“Looking at the Yahoo article, I would definitely say at a minimum Steele’s reports should be viewed as intended to influence as well as to inform,” Strzok wrote on Sept. 23, 2016.

Strzok basically admitted he’d surmised Steele was behind that article — a fact later confirmed — and yet, as the Caller points out, “the FBI maintained its relationship with Steele and failed to inform the Foreign Intelligence Surveillance Court (FISC) that the ex-spy had contact with journalists.”

The Federalist adds that the documents indicate “the FBI began investigating then-presidential candidate Donald Trump and his campaign before the Crossfire Hurricane investigation was opened.”   Before...!!.

While the FBI claims that investigations into Trump’s campaign began with the opening of Crossfire Hurricane on July 31, 2016, communications between Strzok and his alleged mistress, FBI special counsel Lisa Page, show that the agent asked Page to discuss “[o]ur open C[counter-]I[ntelligence] investigations relating to Trump’s Russian connections” with him on July 28, 2016.

Corporate media such as the New York Times suggested that there was no evidence that agents like Strzok were “eager to investigate Mr. Trump’s campaign” and that it was former Trump campaign adviser George Papadopoulos’s comments that sparked the investigation.

Former FBI Director James Comey denied knowledge of any investigation until “sometime towards the end of September 2016.”

And of course, no FBI investigation would be complete without being in bed with CNN.

Strzok’s messages also show that he and others at the FBI had inside information about CNN’s plans to publish a story about then-FBI Director James Comey’s briefing to Trump regarding allegations in the dossier.

“Also Carl Bernstein (yes that Carl) called OPA, said he got a ‘dossier’ from McCain.”

“Awesome,” Page replied. “Let Carl run it down then.”

CNN reported on Jan. 10, 2017, that Comey had briefed Trump on Jan. 6, 2017, regarding an allegation in the dossier that the Kremlin had a sexual blackmail tape against Trump.

Federalist’s Jordan Davidson says, “In addition to stoking the investigation into Russian collusion, Strzok is also responsible for reopening a criminal counterintelligence investigation into former National Security Advisor Gen. Michael Flynn even though an FBI memorandum previously closed the case after “no derogatory information was identified in FBI holdings.”

Strzok was doing exactly what the media, CNN in particular, keep saying he wasn’t doing. And the people Strzok targeted were NOT doing what CNN and friends say they were.

This is the real collusion. It’s pretty stunning that they get away with this stuff so completely.
Posted by Pappy at 12:09 PM