So FBI, why no raid of Hunter Biden's house?! FBI Director Christopher Wray is guiding the agency the wrong way, fast

Rep. Jody Hice, R-Ga., reacts to the FBI raid of Trump’s Mar-a-Lago and the ‘weaponizing’ of government against the former president 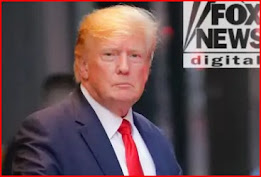 FBI agents scoured Melania Trump’s wardrobe and spent several hours combing through Donald Trump’s private office, breaking open his safe and rifling through drawers when they raided the former First Family’s Mar-a-Lago home in Florida Monday morning.
The Post has learned that the search warrant used by the FBI to enter the palatial Palm Beach property focused solely on presidential records and evidence of classified information being stored there.

A source close to the former president expressed concern that FBI agents or DOJ lawyers conducting the search could have "planted stuff" because they would not allow Trump’s attorneys inside the 128-room building to observe the operation, which lasted more than nine hours.

The raid by over 30 plain clothes agents from the Southern District of Florida and the FBI’s Washington Field Office extended through the Trump family’s entire 3,000-square-foot private quarters, as well as to a separate office and safe, and a locked basement storage room in which 15 cardboard boxes of material from the White House were stored.

An eyewitness to the raid said all of the boxes were confiscated by federal agents Monday, but it is unknown if anything else was taken as no itemized list of items was provided by the FBI.

The boxes contain documents and mementos from Trump’s presidency, reportedly including letters from Barack Obama and Kim Jong Un, and other correspondence with world leaders.

A legal source said that the boxes had been packed up by the General Services Administration and shipped to Mar-a-Lago when Trump left office in January 2020.

Trump’s attorneys, led by Evan Corcoran, had been cooperating fully with federal authorities on the return of the documents to the National Archives and Records Administration, according to sources.

In May, Corcoran granted access into Mar-a-Lago’s windowless storage room to FBI agents who spent several hours searching through the boxes. Trump stopped by the basement to say hello at one point, says someone who was there.

The Trump family since has decamped for the summer to his golf estate in Bedminster, New Jersey.

Mar-a-Lago is closed for the season and only a skeleton staff, including groundskeepers, were present during Monday’s raid.

Access to the 20-acre private country club is believed to have been granted by heavily armed US Secret Service (USSS) agents stationed at the front gates and toting M4 carbines. Lawyers for the former president, who were caught off guard by the raid, arrived an hour later.

The FBI would not have executed a warrant without notifying the Secret Service first, according to a retired high ranking USSS agent.

"USSS legal counsel probably would’ve directed [them] to see copy of warrant and then step back."

Once inside the air-conditioned, white marble-clad private quarters, agents fanned out to search every room, while shocked staff were instructed by Trump’s lawyers to unlock doors and provide the FBI access to every room, including the sumptuous Versailles Master Bedroom, renovated by Melania two years ago.

Another group of agents, including a professional safe cracker, moved to a separate part of the enormous 1924 Spanish stucco building to search Trump’s office and safe.

The demeanor of the three DOJ lawyers who accompanied the FBI was described by one eyewitness as "arrogant," and they repeatedly told Trump representatives: "We have full access to everything. We can go everywhere."

Despite the sweltering 91 degrees temperature Monday, Trump’s lawyers were forbidden by the feds to shelter inside the cool lobby, or to observe the search in any way, but were left outside in the baking sun near a parking lot.

The feds instructed Trump’s representatives to switch off the security cameras but they refused
READ MORE FROM THE NEW YORK POST
Posted by Pappy at 12:24 PM