Commending a President, His Daughter and the Secret Service 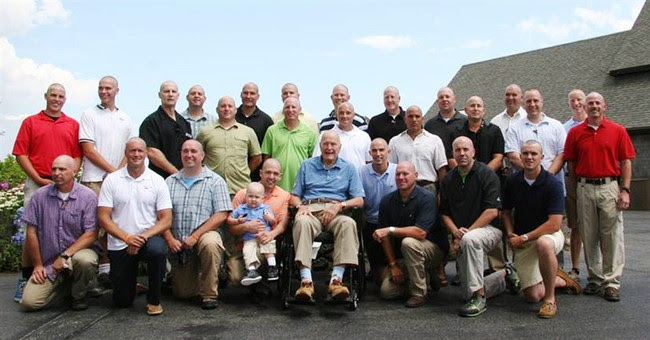 A few weeks ago, a former president and many of his Secret Service agents made a significant sacrifice on behalf of another young American that went largely unnoticed by most of the nation. Did you catch it?
My friend and our 41st president, 89-year-old George H.W. Bush, in solidarity with his Secret Service detail, shaved his head for 2-year-old Patrick -- the son of one of Bush's former agents -- who has leukemia and is undergoing chemotherapy for it.
The Bush Protective Division launched a website, at http://www.patrickspals.org to help with Patrick's medical bills. It also is spearheading the inaugural Patrick's Pals Motorcycle Benefit Run on Aug. 10 in Kennebunkport, Maine, which is a 50-mile motorcycle ride through the countryside, with a lunch and silent auction to follow.
When Bush decided to lose his hair in support of young Patrick, many of us were reminded of Bush's own precious and brave daughter Robin, who died from leukemia 60 years ago at age 3.
George W. Bush was born first in 1946. Pauline Robinson Bush -- known as Robin -- was born second in 1949. She was diagnosed with leukemia right after her brother Jeb was born in 1953.
Barbara Bush recollected those tough times during an interview with her granddaughter Jenna Bush Hager for the Today show. After Robin's prognosis, the former first lady said, the Bushes were told there was nothing they could do. A doctor said: "You don't do anything. She's going to die. ... My advice is to take her home, love her. In about two weeks, she'll be gone."
View Full Article
Posted by Pappy at 2:37 PM