Why Did Bureaucrats Kill Giggles the Baby Deer? Because They Can 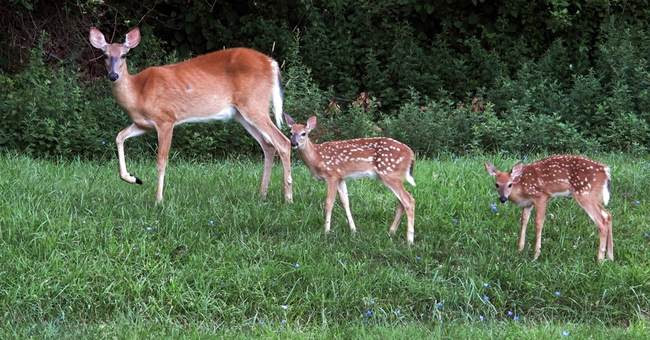 The bad news is that governments do a lot of things they shouldn’t do. The good news is that I never run out of material.
I’ve even created some sub-categories, such as my U.S. vs U.K. government stupidity contest and my great-moments-in-local-government series.
But I never thought I would have a special category about bureaucrats vs. Bambi.
1. Bureaucrats in Virginia filed three misdemeanor charges against a man for the horrible crime of rescuing a deer that was hit by a car.
2. Bureaucrats in Maryland fined two men $90 each for not having life jackets when they had the gall to rescue a deer that fell through some ice.
3. Bureaucrats in Indiana are threatening prison time for a family that rescued a baby deer from coyotes.
The paper pushers of the world seem to harbor a special grudge against these harmless ruminants, since we now have another story about a baby deer. But this time, Bambi was the victim, not the family.
Here are some of the unbelievable details from a local news report.

Two weeks ago, Schulze was working in the barn at the Society of St. Francis on the Kenosha-Illinois border when a swarm of squad cars arrived and officers unloaded with a search warrant. “(There were) nine DNR agents and four deputy sheriffs, and they were all armed to the teeth,” Schulze said. The focus of their search was a baby fawn brought there by an Illinois family worried she had been abandoned by her mother.

My first reaction when reading this was “what the @#$*?” Is he public sector really so bloated that 13 bureaucrats have nothing better to do than to serve a search warrant for a baby deer?
And why on earth were they heavily armed? Were they expecting Osama Bin Bambi?
But don’t answer yet, because it gets more absurd.         New York City imposed a $30,000 fine on a small shop
View Full Article         [click yellow copy for stories]