A "sign of the times", but not the GOOD times....Schiff is a lowlife who would become FAMOUS if he were able to take down the POTUS. His name would be in the history books..... 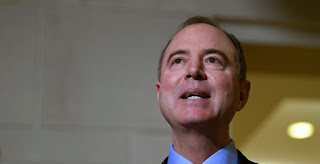 A nation’s decline is usually best evaluated after the fact by historians. From this position of hindsight, the sequence of events is fairly straightforward. Whenever the rule of law is supplanted by the rule of man, anarchy follows and tyranny is the ultimate result. But rarely do those actually experiencing this sequential cultural transition fully appreciate what they are witnessing before it is too late.

Something that today may well be the case in America, as evidenced by the continued political viability our mainstream media and its brainwashed liberal audience are gleefully affording to the machinations of unscrupulous pathological prevaricators like Adam Schiff. Such amoral people are both the byproduct and beneficiary of the anarchy produced when our regard for truth dies and the rule of law is supplanted by the rule of man. The enforcement of our laws has now become politicized to enable those who obtain power—like Schiff—to dictate to whom our laws shall be applied and to whom they shall not. How else can one explain the rapid-fire arrest, indictment, prosecution, and conviction of people like General Flynn and Roger Stone when compared to the absolute immunity from prosecution enjoyed by others—like Hillary Clinton—to whom no laws seem to apply?

This very dystopia of lawlessness has enabled people like Schiff and his allies to foment any seditious plot they deem necessary to advance what is now acknowledged by most thinking human beings to be nothing less than a blatant coup d'état by which they are attempting to overthrow a duly elected president who had the temerity to use the democratic process to defeat the mother of their corruption in 2016. As a result, for the last three years America has been compelled by these lawless anarchists to endure everything from Antifa and sanctuary cities to Stormy Daniels and Mueller’s fraudulent investigation of a Russian hoax. All of which has contributed to bringing us as a nation to the full-blown anarchy that today is only thinly disguised as an “impeachment inquiry.”
READ ON
Posted by Pappy at 3:09 PM