HAPPY THANKSGIVING........Anyone want to say "Trump only thinks of himself"..? Probably the BEST president we've ever had in caring about our country and the military..... 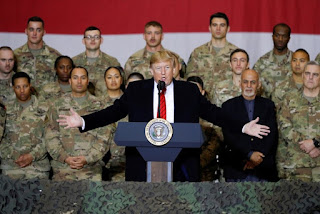 Trump met with Afghan President Ashraf Ghani and served turkey to some U.S. troops before sitting down to eat Thanksgiving dinner with them. He chatted and had his picture taken with some of the U.S. forces deployed there.

It was only the second trip to a war zone by a U.S. president who never served in the military and has often derided U.S. engagement in foreign conflicts as costly blunders. He traveled to Iraq in 2018 for a Christmas holiday visit with troops.

Trump was greeted upon his arrival by U.S. Army General Mark Milley, chairman of the Joint Chiefs of Staff. Milley said on Wednesday that a successful outcome from peace talks on ending the 18-year war in Afghanistan could happen in the "near term."

Trump has wanted to end U.S. involvement in Afghanistan since his days as a presidential candidate. READ MORE
Posted by Pappy at 6:44 PM