Lefty Writer: Let's Face It, the IG Report Is Damning for the FBI, Adam Schiff, and Much of the Media
Guy Benson  Dec 11th 2019 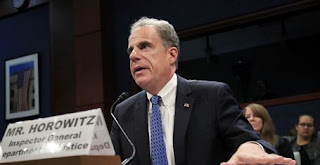 I don't agree with Matt Taibbi terribly often, but I've admired his ability to set aside his ideological proclivities and deep dislike for President Trump as he issues scathing indictments of the media's hysterical hive-mind, groupthink on the Russia saga.  His devastating contribution to this genre of commentary in late March made some waves, and now he's followed up with a brutal piece in Rolling Stone on the DOJ Inspector General report. Specifically, he argues, IG Michael Horowitz uncovered numerous examples of serious omissions and misconduct in the FBI's handling of the Russia/Trump investigation -- particularly as it pertains to obtaining FISA warrants for domestic surveillance and its disproportionate reliance on the fatally flawed Steele dossier (see below).  Let's start with the FISA issue: