Two Christmas Parades are Cancelled in North Carolina Because of Potential for ANTIFA Violence   This is the violent Left’s war on Christmas.    Dec 7, 2019 By Shane Trejo 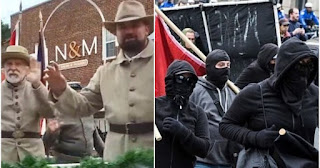 Christmas parades have been cancelled in two North Carolina towns after threats of protests by ANTIFA-style leftists have caused the cities to back down.
“We aren’t happy telling kids they can’t attend or participate in this year’s parade — but it’s better than trying to explain to a parent whose child was injured despite so many warning signs,” Wake Forest Police Chief Jeff Leonard said in a statement.
“We’re concerned about outside agitators that don’t notify us. Radicals don’t typically call ahead. These aren’t area residents we’re talking about. These are professional protesters who have no regard for the safety and well-being of others,” Leonard added.
“For most of us, our annual Christmas parade is about spending time with friends and family and celebrating the spirit of the season,” Wake Forest Mayor Vivian Jones said.
READ ON
Posted by Pappy at 6:31 PM