A Florida man who feels he is being unfairly treated by local code enforcement officials has mounted an unusual protest — he painted his house like the American flag.

"It's just total government abuse. This is still America," said Brent Greer, who lives in Bradenton, Florida.
Greer is upset that city code enforcement officers inspected his home in February after an anonymous complaint that a 15-foot-tall Christmas tree on his front porch had fallen over, he said.
A code enforcement officer came to inspect, and Greer said, "My wife gladly took it down." 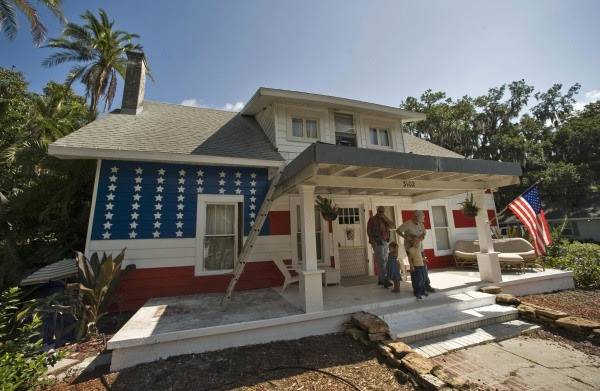 Brent Greer and his wife Catherine Greer stand in the shade as they talk with their two daughters on the front porch of their 110-year-old house in Bradenton, Florida, on June 6. The Greer's have painted a U.S. flag on the side of their house to protest city code enforcement fines. STORY
Posted by Pappy at 7:18 PM