I thought it strange that they were taking so long to bury him ??? 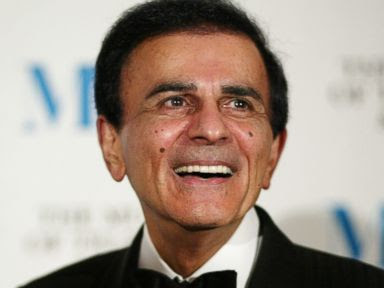 The late Casey Kasem's body is missing, more than a month after the radio icon's death, according to his daughter.
A spokesperson for Kerri Kasem confirmed to ABC News that the legend's adult children have yet to see his body. Kasem died on June 15 at 82 years old after suffering from a form of dementia. An autopsy has also not been performed yet, the family said.
Jean Kasem denied to ABC News that his body is missing.
Jean Kasem, the radio personality's second wife, had been embroiled in a conflict with his children from a previous marriage over her husband's medical care for months before he died. She collected the body within 72 hours of his death.
Kerri Kasem was informed Thursday that Kasem's body was    no longer at the mortuary, where it had remained for a month.           READ MORE
Posted by Pappy at 12:05 AM