Don't know if they did anything wrong or not but going by past experiences, they put a mike in front of your face, or walk backwards in front of you, blocking your way or just being naturally obnoxious

A documentary producer, a photojournalist, a live-streamer and a freelance reporter facing up to 10 years in prison and a $25,000 fine if convicted 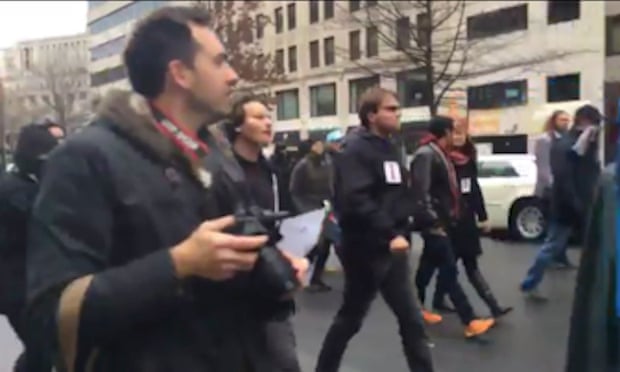 Matt Hopard. Photograph: Handout A documentary producer, a photojournalist, a live-streamer and a freelance reporter were each charged with the most serious level of offense under Washington DC’s law against rioting, after being caught up in the police action against demonstrators.

The Guardian learned of their arrests after reporting on Monday that the journalists Evan Engel of Vocativ and Alex Rubinstein of RT America had also been arrested and charged with felonies while covering the same unrest on Friday morning.

All six were arraigned in superior court on Saturday and released to await further hearings in February and March, according to court filings. The Committee to Protect Journalists (CPJ) said late on Tuesday that charges against journalists who were covering the protests should be dropped.