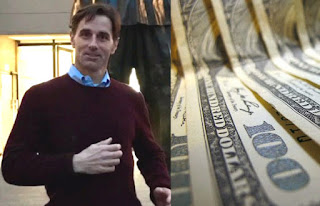 (Gateway Pundit) – The more you look at Paul Pelosi Jr. the more you see another Hunter Biden.

Paul Pelosi Jr. – like Hunter Biden, was given no-show jobs for which he wasn’t qualified in an effort to buy influence with his politician parent.

Nancy Pelosi’s son Paul is also on the board of an energy company.

Paul Pelosi Jr. also traveled to Ukraine for his work.

AND — Better Yet — Speaker Nancy Pelosi even appears in the company’s video ad!

According to Patrick Howley at National File Speaker Pelosi’s son Paul Jr. was an executive at Viscoil.
Paul Jr. traveled to Ukraine in 2017.

Shortly after his mother Nancy Pelosi became the first woman speaker, Paul Pelosi Jr., was hired by InfoUSA for $180,000 a year as its vice president for Strategic Planning in 2007.

Pelosi kept his other full-time day job as a mortgage loan officer for Countrywide Loans in California. And, unlike all of the other InfoUSA employees, Paul Pelosi did not report to work at the company’s headquarters in Omaha.

It must be nice being the spawn of a powerful Democrat politician.

Newsmax reported on Paul Pelosi’s shady dealings in 2007:
The firm InfoUSA, headed by major Clinton backer Vinod Gupta, has placed Pelosi’s son, Paul Pelosi Jr., on its payroll – even though he has no experience in the company’s main business activities, NewsMax has learned.

The company is also under fire in a shareholder lawsuit which alleges that Gupta is appropriating company funds for personal use and his political pet projects.

Shareholder critics are furious that Gupta had InfoUsa pay former President Bill Clinton $2.1 million in “consulting fees” since he left the White House, with another $1.2 million promised.

Just four weeks after Nancy Pelosi became speaker of the House this past January, Gupta and InfoUSA hired her son as a senior vice president. He told NewsMax InfoUsa pays him $180,000 a year.

Even though his job with InfoUSA is considered full-time, Paul Pelosi continues another full-time job, as a home loan officer at Countrywide Home Loans, part of Countrywide Financial, in San Mateo, a suburb of San Francisco.

While InfoUSA is based in Omaha, Pelosi said he reports to a small InfoUSA office in San Mateo.

In two interviews, Paul Pelosi confirmed that Gupta hired him as senior vice president for strategic development starting Feb. 1, just after Pelosi’s mother took the gavel as speaker on Jan. 4. He said his mother is aware of his new job.

A person familiar with the arrangement says Gupta treats Pelosi as a “trophy” and has the Speaker’s son accompany him at high profile meetings around the country.

Pelosi denied the suggestion he is being used because of his family ties.
“I don’t think that’s really what happens,” he said

thegatewaypundit.com/2019/12/revealed-nancy-pelosis-son-paul-pelosi-jr-was-given-lucrative-180000-a-year-position-on-infousa-weeks-after-his-mother-became-speaker-despite-having-no-experience/
Posted by Pappy at 9:06 PM