This poor young girl is being USED....A pawn for the "GLOBAL WARMING" zealots.....Don't worry about her, she's just a disposable child 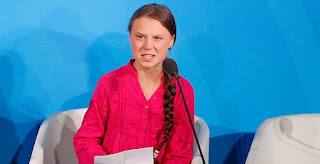 But if you ask a leftist what one or two books you should read to understand leftism, every leftist will give you a different answer -- or need some time to think it over. Few, if any, will suggest Marx's "Das Kapital" because almost no leftists have read it and because you will either not finish the book or reject it as incoherent.

So, then, how is one to understand what leftism stands for?

The truth is it is almost impossible. What leftist in history would have ever imagined that to be a leftist, one would have to believe that men give birth or men have periods, or that it is fair to women to have to compete in sports with biological males who identify as females?

There are two primary reasons it is so difficult, if not impossible, to define leftism. One is that it ultimately stands for chaos:

-- "Music" without tonality, melody or harmony.

-- Rejection of the concept of better or worse civilizations.

-- Rejection of the concept of better or worse art.

-- Removal of Shakespeare's picture from a university English department because he was a white male.

-- The end of all use of fossil fuels -- even in transportation (as per the recent recommendation by the head of the U.N. World Meteorological Organization).

-- The dismantling of capitalism, the economic engine that has lifted billions of people out of abject poverty.