The letter is indicative of just how left-wing the Department of Justice’s culture has become. 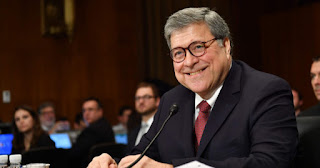 The letter takes a staunchly partisan Democratic tone, leaving no doubt as to their partisan allegiances of the high-ranking government employees who have signed it. The letter claims that Barr is “doing the President’s personal bidding” for clamping down on a culture of corruption present within elements of the powerful government entity.

The liberal bureaucrats are especially upset with Barr’s intervention in the criminal case of a former Trump campaign advisor, Roger Stone. Stone was set to be sentenced to a draconian and lengthy prison sentence for process crimes that amount to no more than lying to congress, a witch hunt that had many James Comey-style elite DOJ employees smitten with glee. Barr intervened to overturn the sentencing goals of prosecutors tasked with the case, leading to several of them resigning in protest.
fREAD ON
Posted by Pappy at 9:04 PM