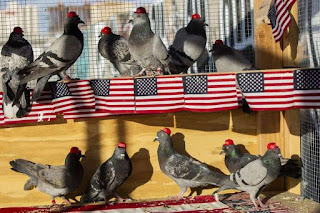 According to an email from the group's apparent leader "Coo Hand Luke," P.U.T.I.N. — which stands for Pigeons United To Interfere Now — released the birds purposely on the eve of the Democratic debate set for Las Vegas on Wednesday.

The group included video of the pigeons' release in their media alert.

One of the pigeons was attached with a small orange hairpiece. The rest wear "MAGA" (Make America Great Again) hats, synonymous with supporters of President Donald Trump.

The group said they were inspired by "the 1970’s Cold War Operation, 'Tacana,' in which the CIA explored the use of pigeons equipped with tiny cameras to spy on Soviet sites of interest."

The group called the pigeon release an "aerial protest."

In December, someone or some people attached small cowboy hats to several pigeons found in the Las Vegas Valley. Lofty Hopes pigeon rescue recovered two of them and removed their hats. One of the pigeons later died.

Neither Las Vegas Metropolitan Police nor a local pigeon rescue group were available for comment on Tuesday night.