What is the 'boogaloo?' How online calls for a violent uprising are hitting the mainstream  Brandy Zadrozny  4 hrs ago  NBC news

An anti-government movement that advocates for a violent uprising targeting liberal political opponents and law enforcement has moved from the fringes of the internet into the mainstream in recent months and surged on social media, according to a group of researchers that tracks hate groups. 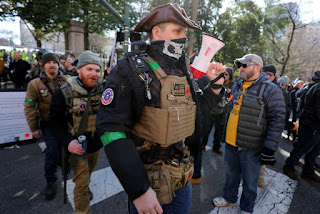 The movement, which says it wants a second Civil War organized around the term "boogaloo," now includes groups on mainstream internet platforms such as Facebook, Instagram, Twitter and Reddit as well as fringe websites including 4chan, according to a report released Tuesday night by the Network Contagion Research Institute (NCRI), an independent non-profit of scientists and engineers that tracks and reports on misinformation and hate speech across social media.

While calls for organized and targeted violence in the form of a new Civil War have previously circulated among some hate groups, the emergence of the term "boogaloo" appeared to be a new and discrete movement. NCRI researchers analyzed more than 100 million social media posts and comments and found that through the use of memes — inside jokes commonly in the form of images — extremists have pushed anti-government and anti-law enforcement messages across social media platforms. They have also organized online communities with tens of thousands of members, some of whom have assembled at real-world events.
The report "represents a breakthrough case study in the capacity to identify cyber swarms and viral insurgencies in nearly real time as they are developing in plain sight," wrote John Farmer, a former New Jersey attorney general and current director of the Miller Center for Community Protection and Resilience at Rutgers University, in the report's forward.