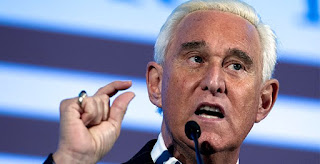 A day after a nine-year sentencing recommendation for the elderly Roger Stone was filed, Senior DOJ officials immediately distanced themselves from the recommendation. They told CBS News that the prison time recommendation was "extreme, excessive, grossly disproportionate to offenses," and that this is not what was briefed to the DOJ by the assigned prosecutors. Hours later, all four lawyers assigned to the case withdrew, with one, Jonathan Kravis, resigning from the DOJ entirely.

This is unusual, to say the least. Top to bottom, from the start of the case to this shocking end, has been unprecedented. What is going on?

President Trump asked: "Who are the four prosecutors (Mueller people?) who cut and ran after being exposed for recommending a ridiculous nine-year prison sentence to a man that got caught up in an investigation that was illegal, the Mueller Scam, and shouldn't ever even have started?"

I went to federal trial attorney Jesse Binnall for some answers. Binnall defends high-profile clients against political witch-hunts and has defended cases brought by Jonathan Kravis in the past. Currently, Binnall is defending Michael Flynn alongside Sidney Powell.

In your professional opinion, was anything unusual about the Roger Stone case?

"Roger Stone wouldn't ever have been a target of prosecution had he not been a Trump supporter. The President was absolutely right; the political underpinnings of this case are very disturbing. The events of the past few days show just how unusual this case really is."

Can you explain what exactly was unusual in recent days, and why?

"These four prosecutors filed a brief making a sentencing recommendation without getting approval from the chain of command. That is extraordinarily unusual in the DOJ. In fact, I can say it's unheard of at the DOJ; certainly, I've never heard of it. In practice, DOJ lawyers almost always get approval for everything they do."
Then, all four prosecutors on this case withdrew in succession, with one, Kravis, resigning from the DOJ entirely. This is unheard of. Why do you think they did it? Do you believe they planned and colluded?