If nothing is wrong with these bills, why do they compose and sign them in SECRET..??? 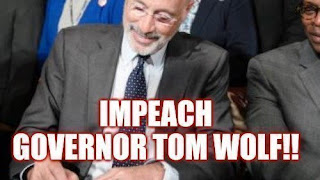 Pennsylvania Governor Tom Wolf recently signed an executive order to "combat gun violence" without disclosing the details of said order. He followed up that "ceremony" with saying "this is just a start."

Update: When this petition was started, Govenor Wolf had not yet disclosed any details about his executive order. Details have now been released and you can find them in the following link.

https://www.governor.pa.gov/executive-order-2019-06-reducing-gun-violence/
Addendum: Prior to this current development in Wolfs consistent attacks on our rights to own firearms, Wolf pushed and was able to pass a gun registry bill in the house. This was a blatant violation of our constitutional rights and was rather alarming to say the least. It generated multiple and repetitive fees and fines, gave state police the right to deny ownership at any time for any reason, and placed unrealistic burdens and expectations on legal gun owners. Link below.

Refer to Pa constitution article 1, section 21. "The right of the citizens to bear arms in defense of themselves and the State shall not be questioned."

"We, the People are the government in this country, sir. NOT you! WE rightfully DEMAND that YOU obey our Pennsylvania Constitution, in particular Article I. YOU, sir, are Usurping authority that you have NOT been given BY that Constitution, and THIS, SIR, is nothing less than an ACT OF WAR against the Free Citizens of this Commonwealth. ANY firearm law or infringement upon Art I Rights of our Constitution is an Act of Treason on your part against that Constitution." - Concerned citizen.

The gentleman who stated the above shall not be named, unless he chooses to release his name. However, what he states is true. This IS nothing short of an act of war against the free people of our commonwealth and is a blatant act of treason against our commonwealth's constitution. As such we are well within our rights to demand impeachment proceedings begin IMMEDIATELY against Govenor Tom Wolf on the grounds of betraying Article 1, Section 21 of our constitution, misbehaving in office through deliberate use of an executive order which violates Article 1, section 21, and for being disloyal to the obligations of his office to uphold our laws and constitution.

Failure to act on this clear attack on our state and federal constitutional rights will reflect significantly upon state legislators in following elections.

Update: So apparently, another Avenue that wolf is pushing is unconstitutional "red flag law" legislation. Here is a link to an article with details, as well as a strong message as to why red flag laws are wrong and ineffective.

"The Wolf is approaching... We can simply join the flock and fall prey to the wolf, or we can take on the role of the shepherd and fend off the wolves." - Jeremy D. Bemis

ns of related definitions and articles were typed in bold to stand out in the following listed information.

The right of the citizens to bear arms in defense of themselves and the State shall not be questioned.

The Governor and all other civil officers shall be liable to impeachment for any misbehavior in office, but judgment in such cases shall not extend further than to removal from office and disqualification to hold any office of trust or profit under this Commonwealth. The person accused, whether convicted or acquitted, shall nevertheless be liable to indictment, trial, judgment and punishment according to law.