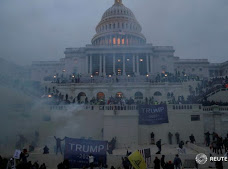 Since the storming of the Capitol on Jan. 6th, the FBI has been hard at work to determine the inidividuals involved and the extent of planning that went into the event. Now, reports are showing that Democrat House Speaker Nancy Pelosi has order the FBI to seize phone records of Republican members of Congress whom Democrats have claimed helped assist in planning the violent attack. There has yet to be any concrete evidence to casue DEmocrats to push this dangerous narrative.

According to reports from The Intercept

In the hours and days after the Capitol riot, the FBI relied in some cases on emergency orders that do not require court authorization in order to quickly secure actual communications from people who were identified at the crime scene. Investigators have also relied on data “dumps” from cellphone towers in the area to provide a map of who was there, allowing them to trace call records — but not content — from the phones.

The cellphone data includes many records from the members of Congress and staff members who were at the Capitol that day to certify President Joe Biden’s election victory. The FBI is “searching cell towers and phones pinging off cell sites in the area to determine visitors to the Capitol,” a recently retired senior FBI official told The Intercept. The data is also being used to map links between suspects, which include members of Congress, they also said. (Capitol Police are reportedly investigating whether lawmakers helped rioters gain access to the Capitol as several Democrats have alleged they did, though Republican officials deny this.)

In a letter sent two days after the riot to 11 major cellphone and internet companies, including AT&T, T-Mobile, Verizon, Apple, and Facebook, Sen. Mark Warner, D-Va., urged the companies to “immediately preserve content and associated meta-data connected to” the riot. Some of the telecommunications providers questioned whether Warner has the authority to make such a request, but a number of them appear to have been preserving data from the event anyway because of the large scale of violence, the source said.

According to sources close to the data collection effort, the FBI has used emergency powers that do not require court authorization to subvert criticism. The FBI has reportedly “collected reams of private cellphone data and communications that go beyond the videos that rioters shared widely on social media.”
Posted by Pappy at 11:18 PM