These stats sound more like a 3rd world country...and Biden wants us to partner up with CHINA...??

How China became a notorious executioner with injections and firing squads  By Jamie Micklethwaite, The Sun Feb 18, 2021 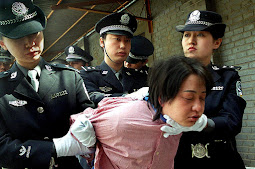 China has been branded the world’s worst executioner as the state kills thousands of people every year using firing squads, lethal injections and mobile death vans.
The true numbers of those killed by the Communist Party are thought to be staggeringly high – but the regime keeps them closely concealed as state secrets.

Human rights experts told The Sun Online about the vile system which has come into the spotlight again after the killing of Chinese tycoon Lai Xiaomin.

He was executed last month on corruption charges – as in China even white-collar crimes and drug charges can land on death row.

And should you land yourself in the dock be wary, as Chinese prosecutors have a conviction rate of around 99 percent as they doom thousands to execution.

Killer jabs were legalized by the regime in the 90s and are sometimes administered in one of the state’s mobile “execution vans”.

Convicts are said to be loaded into a van and strapped to a table where they administered the lethal injection.

Organs are then believed harvested from executed prisoners without any permission for use in medicine and scientific experiments.

Amnesty International has named China as the world’s worst executor by a large margin – with its body count believed to be larger than the rest of the world’s combine total of 657.
READ MORE
Posted by Pappy at 9:11 PM