Immigrant found trying to sneak across border inside a washing machine 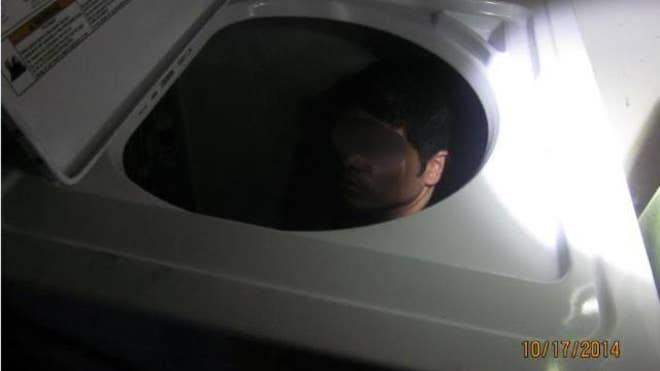 Clever but caught: the most bizarre border busts

Over the years, people have tried some unusual ways to smuggle drugs and people across the U.S.-Mexico border, as photos from U.S. Customs and Border Patrol show.

Border patrol agents in south Texas say they discovered five suspects attempting to illegally cross into the United States inside a washing machine and cardboard boxes.
According to the Rio Grande Valley Sector of U.S. Customs and Border Protection, around 8 p.m. Friday agents at the Falfurrias Border Patrol Station discovered the five people being transported inside a U-Haul truck during a checkpoint stop.
Agents say a canine alerted them to suspects and inside they found one person inside a washing machine and an additional four inside cardboard boxes.
They were all were offered medical attention but declined it.
The driver and passenger, both U.S. citizens, were taken into custody and the case was turned over to Homeland Security Investigation agents.
Posted by Pappy at 11:05 PM