See What’s Got Loretta Lynch on the Retreat 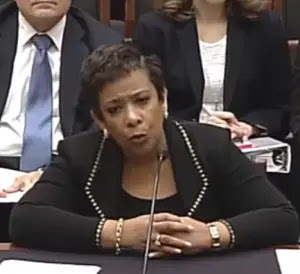 It’s hard to tell if Loretta Lynch is a step down from
EricHolder or an improvement.

Holder was doggedly determined to wear awayas much of the constitution as he possibly he could.

Loretta Lynch looked like she was going to as well.

So here’s what happened which makes it appear Lynch might actually be a softer (and slightly better) than Holder.

Shortly after the terrorist attacks in San Bernardino it was determined the perpetrators in the attack were devout Muslims. Understandably Americans all across the nation were incensed that people who were following an “ISIS playbook” had committed this horrible act on American soil.

Especially considering it was only a few days after the Paris attacks that Obama assured the entire world ISIS was “under control.”

People everywhere sounded off on the dangers of ISIS and radical Islam…and they’re not without warrant as it’s a legitimate concern.

But Lynch made it seem like her Department of Justice wasn’t going to tolerate those kinds of actions and would prosecute anyone who spoke out against Islam.
READ MORE

Speaking to a Muslim Advocates dinner in Arlington, Va., Lynch affirmed that “this is a country that is based upon free speech.” However, she went on to suggest that the Justice Department would “take action” when such speech “edges towards violence, when we see the potential to lift…that mantle of anti-Muslim rhetoric.”