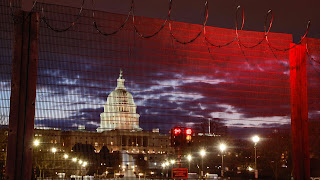 Officials in the nation’s capital are facing backlash after they called for “permanent fencing” to go up around the U.S. Capitol Building in response to the riot that broke out earlier this month.

Capitol Police Chief Yogananda Pittman said on Thursday that she had ordered the department to “conduct a physical security assessment of the entire Capitol Complex,” which led her to the conclusion that the fencing, which was supposed to be temporary, needed to be made permanent.

“As I noted earlier this week, even before September 11, 2001, security experts argued that more needed to be done to protect the U.S. Capitol,” she wrote. “In fact, a 2006 security assessment specifically recommended the installation of a permanent perimeter fence around the Capitol.”

“In light of recent events, I can unequivocally say that vast improvements to the physical security infrastructure must be made to include permanent fencing, and the availability of ready, back-up forces in close proximity to the Capitol,” she continued. “I look forward to working with Congress on identifying the security improvements necessary to ensure the safety and security of the Congress and the U.S. Capitol.”

The permanent fencing and other measures would need to be approved “by the Capitol Police Board, which includes the Senate and House sergeants-at-arms as well as the architect of the Capitol,” The Washington Post reported. “Appropriations for large sums of money, such as a bill to permanently fortify the Capitol, would also need approval by the House and Senate.”

The move comes as Democrat President Joe Biden signed an Executive Order on his first day in office that canceled ongoing construction of the border wall on the southern border, which was being built to put a dent in illegal immigration and trafficking activities along the U.S.-Mexico border.

“It’ll cost taxpayers billions of dollars, billions of dollars in settlement fees,” he said. “We’re going to walk away from areas of the wall that have already been constructed. There are going to be some areas where, let’s say we’ve already started to dig a trench and put some rebar in there, we’re actually going to have to stop and pay extra to have them remove the rebar and fill in the trench.”

The idea of putting up permanent fencing around the Capitol was criticized by the vast majority of those who weighed in on the issue online.
Posted by Pappy at 4:27 PM