Republicans need to stand up and do their job....!! 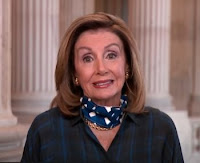 Post-election polls indicate that 77 percent of Republicans believe mail-in fraud contributed to a win by Joe Biden. With this massive victory under their belts, Democrats now plan to double-down and effectively cheat to win every election into the foreseeable future.

Speaker of the House Nancy Pelosi and her band of political insurgents introduced a voting bill this week that would effectively disenfranchise Trump supporters, Republican voters and anyone who disagrees with their agenda permanently.

Pelosi’s proposed legislation would put control of voter rolls in the hands of Big Tech corporations and the Democratic Party. Known as HR 1, the Bill employs misleading language to make it appear as if it protects voting rights and access. But weigh HR 1 clauses against reality, and it’s easy to see the treasonous intent.

Part 1 of the Bill calls for “Requiring availability of internet for voter registration. Use of internet to update registration information,” and a “Provision of election information by electronic mail to individuals registered to vote.” From the get-go, Pelosi and her power-hungry Democrats want to secure power by giving complete control to their liberal Big Tech co-conspirators at Google, Facebook, Twitter, Apple and Microsoft, among others. All of those forces have worked tirelessly to suppress the First Amendment free speech rights of Trump supporters.

This type of language will most assuredly be picked up by social media and fake news outlets and twisted. The use of the word “caging” is a blatant attempt to vilify routine attempts to identify people orchestrating voter fraud. Prime examples include foreign nationals voting in the U.S., individuals voting in two states, and in-state voting in districts they don’t live in to sway local elections. These tactics are routinely challenged by spotters who can ask to see someone’s identification and match it to local voter rolls. Republicans recognize this and other measures as foundations of election integrity. Calling these safeguards “caging” is insane!

Democrats also anticipate they can mislead minors to vote in their favor by working in conjunction with social media platforms and fake news organizations, just like in the 2020 election. So bold have they grown in this capacity that HR1 includes a provision to accept “voter registration applications from individuals under 18 years of age.”

Should HR 1 become law, Democrats would gain complete and unfettered control over elections. Their coordinated efforts with Big Tech are well documented, and these anti-Trump, anti-conservative internet corporations would become the Democrats’ gatekeepers. Big Tech and Democrats would have the power to alter, delete, or set aside ballots of Republicans or anyone else who refuses to vote to keep them in power. From electing local justices of the peace to the President of the United States, every election would be decided by Democrats and Big Tech