The only riots still going on are t in Seattle and Portland, which have been going on for a long time...Until now, the demoRats have ignored them....Now they want to blame them on the GOP..?
US issues terror alert over anti-government extremists
Wed, January 27, 2021 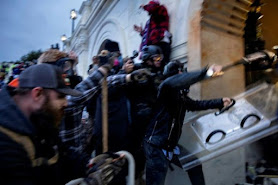 More than 150 people, including members of armed extremist groups, have been arrested since Trump supporters stormed the US Capitol on January 6, 2021

The US Department of Homeland Security declared a nationwide terrorism alert Wednesday, citing the potential threat from domestic anti-government extremists opposed to Joe Biden as president.

"Information suggests that some ideologically-motivated violent extremists with objections to the exercise of governmental authority and the presidential transition, as well as other perceived grievances fueled by false narratives, could continue to mobilize to incite or commit violence," the department said.

The National Terrorism Advisory System Bulletin said a heightened threat of attack "will persist in the weeks following the successful presidential inauguration," which took place on January 20.

"DHS does not have any information to indicate a specific, credible plot," it said.

"However, violent riots have continued in recent days and we remain concerned that individuals frustrated with the exercise of governmental authority and the presidential transition... could continue to mobilize a broad range of ideologically-motivated actors to incite or commit violence."

The alert said there had been mounting threats since last year from domestic violent extremists motivated by Covid-19 restrictions, Biden's defeat of Donald Trump in the November election, police brutality and illegal immigration.

DHS said these motivations could remain in place for the coming months and that the January 6 attack by Trump supporters on Congress could embolden extremists "to target elected officials and government facilities."

More than 150 people, including members of armed extremist groups, have been arrested since the attack, which has been branded as an insurrection.

The department urged the public to report suspicious activity and threats of violence.
Posted by Pappy at 3:30 PM