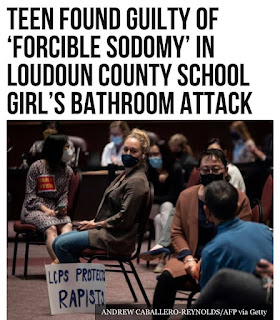 A Virginia judge ruled on Monday that a male student at Loudoun County’s Stone Bridge High School is guilty of sexually assaulting a female student in a girls’ bathroom in May.
While gender fluidity was not raised during the hearing, court documents confirm the male suspect was wearing a skirt when the assault took place, reports Yahoo! News, adding that the female victim testified in court that she was violently coerced into performing sexual acts.
The male student, a 14-year-old boy, was later arrested in connection to the case on two counts of forcible sodomy, the Loudoun County Sheriff’s Office said, according to a report by WUSA9.
The teen suspect was found guilty on all charges, reports WJLA 7News I-Team. Sentencing for the student will happen in November, but only after a Loudon County Judge determines the outcome of the second set of charges against the same student involving sexual battery at Broad Run High School.
After the assault at Stone Bridge High School, the male student was transferred to Broad Run, where he allegedly assaulted a second female student in early October.
The victim’s family attorney, Bill Stanley of The Stanley Law Group, released a statement on behalf of the family on Monday, stating, “We are relieved that justice was served today for the Smith’s daughter.”
“This horrible incident has deeply affected the Smith family, and they are grateful for today’s outcome,” the statement added.
Around the time of the sexual assault in the girls’ bathroom, the Loudoun County School Board was concerning itself with a policy that would give students who believe they are the opposite sex access to school facilities, groups, and sports teams of their biological counterparts.
In June, Scott Smith, the father of the victim, went to a Loudoun County school board meeting looking for answers after his daughter was assaulted. A heated exchange ensued at the meeting, and Smith was arrested for obstruction of justice and disorderly conduct.
Hundreds of parents were also present to voice their concerns about the district’s transgender policy and Critical Race Theory (CRT). The school board eventually voted 7-2 to approve the transgender-related policy.
Earlier this month, Scott Ziegler, the superintendent of the embattled Loudoun County Public Schools, admitted that the school district “failed” to provide a safe environment for its students.
Ziegler’s comments were in response to local parents outraged over how reports of the two sexual assaults were handled inside schools. Following the superintendent’s statement, board member Beth Barts — who previously targeted parents who are against Critical Race Theory in schools — resigned from her position.

Okay, I'm just REALLY Confused. If I went home and told my dad I was just called to the office, there would have been some real trouble in my life. I can't imagine trying to explain why I was no longer Allowed to go back to the school I'd been in and now had to go to a different school. My dad would have dragged my sickass To the cops, After he rearranged my anatomy.
Did this creeps parents not know? Seriously?
Why are the parents not part of the story?