Why Is America Financing the Chinese War Machine?  by Lawrence Kadish  October 25, 2021 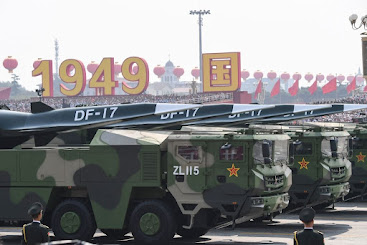 An economy that stands on the brink of a multi-trillion dollar self-induced debt makes us vulnerable to a fiscal collapse. Financial discipline will be
required if we actually wish to stop our financing of the Chinese war machine. Pictured: Military vehicles carrying DF-17 missiles, which are able mount the DF-ZF Hypersonic Glide Vehicle, participate in a military parade in Beijing, China on October 1, 2019. (Photo by

Historians who have studied the decline and fall of great modern empires must be queasy these days.

Many have chronicled how a once mighty China lost its sovereignty to colonial powers during the early years of the 20th Century. Their enfeebled empress and a humbled military were swept aside by a European coalition of nations only to find that China was to become the bloody prize of Japanese generals whose forces raped and massacred their way to Beijing.

The West may not remember this "sideshow" of World War II and many Japanese still decline to acknowledge their legacy, but the Chinese remember.

How did the Chinese come to possess such prowess?