"Come on, man," seems to be President Biden's signature response to any uncomfortable question. The phrase is meant to be both dismissive and conclusive in ending inquiries, frequently used to counter reporters before often walking away, and so often repeated that it appears on T-Shirts or coffee mugs and in remixes. 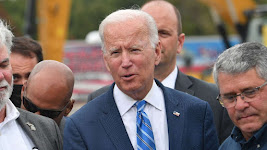 This week, however, it was not the pesky press but freedom itself that got hit with a version of the comeback. When asked during a CNN town hall program about those still objecting to taking COVID vaccines, Biden mocked them and their claimed rights with "Come on, 'freedom.' " He then called for any police officers, firefighters, medical personnel or other first responders to be fired en masse if they refuse to be vaccinated.

Biden's response to the question was applauded by the CNN audience, as if to say "Freedom - that is so last century." And he reduced any vaccine refusals to claiming "I have the freedom to kill you with my COVID."
He is not alone in such rhetoric. Chicago's Mayor Lori Lightfoot declared that police officers refusing to take vaccines are insurrectionists.

The problem is that the courts already recognize some religious exemption arguments. Those arguments are based on both the constitutional protection of religious values but also laws like Title VII of the Civil Rights Act, 42 U.S.C. §2000e-2(a), which declares unlawful any "employment practice for an employer ... to fail or refuse to hire or to discharge any individual, or otherwise to discriminate against any individual with respect to his compensation, terms, conditions, or privileges of employment because of such individual's ... religion."

The federal government also is subject to the Religious Freedom Restoration Act (RFRA), which prohibits the government and other covered entities like the District of Columbia from "substantially burden[ing]" a person's exercise of religion. Under RFRA, there is no "Come on, man," defense. Instead, the federal government must show that the burden imposed furthers a "compelling governmental interest" and is "the least restrictive means" of furthering that interest.
READ MORE
Posted by Pappy at 1:16 PM

If the "president" is making a decision affecting MOST of the citizens of the U.S., He needs more of an explanation than "Come on man", I would think it would conflict with many other decisions made by lawmakers and even the Supreme court. Laws or decisions about our rights about what we can do concerning our own body or those in our family. you can't have it one way for these vaccines and differently for any other reason...Also why should anyone be allowed to mandate taking a medication which has NOT been proven to always work, like the case of Colin Powell....fully vaccinated, but still DIED of covid19.. SO....WHY TAKE THE JAB..? uNLESS he can prove that the vaccine is 100% effective, there should be NO mandate. .....My wife and I were vaccinated with J&J, one and done but now they say "BOOSTERS". We only too k the shot so we could travel, see shows, eat in restraints etc. Otherwise I never would have gotten it....Communist Pigs designating what I can do....!!