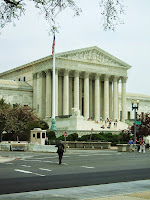 The newspapers all emphasized that a federal judge had found President Obama's immigration program unconstitutional.  Upon reading the articles, none of the major news outlets asked the question, how could a program that was announced less than a month ago and that not yet been implemented ever come to a point this quickly where a federal judge is issuing an opinion on it?

Keep in mind that Article III of the Constitution provides that the judicial power of the United States extends to cases arising under the Constitution and the laws of the United States.  That is, unlike some other countries, the U.S. federal courts cannot issue an opinion on a law or police ad hoc.  There must be an actual case or controversy before them; a party must actually be aggrieved by some action.

LAST PARAGRAPH IN ARTICLE......................
And thus, we are left with the ultimate irony in this case.  In order to find that the President violated Separation of Powers, the judge himself had to violate Separation of Powers and issue an opinion on a topic over which he had no jurisdiction.
So what is the case or controversy involved in Juarez-Escobar?  The case involved a man who was ordered deported in 2005.  He left the United States, but returned without obtaining a visa to work with his brother, who is a U.S. citizen.  The man has a U.S. citizen child.  He was pulled over in Western Pennsylvania for driving under the influence.  While in state custody, the Federal Government was informed of his incarceration.  He was criminally charged in the U.S. District Court for the Western District of Pennsylvania with re-entering the United States after having been deported without a proper visa.  After first pleading not guilty, the defendant changed his plea to guilty and was in the process of being sentenced by the court.  The court was about to follow its own practice of sentencing the defendant to time served plus one year of supervised probation with an order that the defendant obtain a proper visa before re-entering the United States.  The change of plea hearing took place in October of 2014.  Before the court passed sentence, President Obama made his announcement of the deferred action program for parents of U.S. citizens.  A few days later, on its own motion, the court requested briefing on how the President's program would affect the defendant's case.

It was in this posture that the court issued its opinion that the President's program was unconstitutional because it violated separation of powers.

The problem here is that issues of whether a particular defendant would be deported or whether they qualify for some form of immigration relief never go before a U.S. District Court.  Almost all immigration matters are appealed to the U.S. Circuit Courts directly from the administrative agency in charge of making the decision.  The only exceptions are cases where the Government denies a petition for naturalization (citizenship) or when the Government has taken so long to issue its decision that a party finds it necessary to seek a Writ of Mandamus.  U.S District Courts, in the context of a criminal sentencing, just do not have jurisdiction to consider immigration relief.  Indeed, in this very opinion the judge recognizes that he would have no jurisdiction to pass on issues of whether a defendant would qualify for some sort of immigration relief.

The fact that President Obama had announced his intention to grant deferred action to a number of parents of U.S. citizens or permanent residents, therefore, had no relevance to the sentencing of the defendant in Juarez-Escobar.  It is not an issue that a U.S. District Judge would have any jurisdiction to address.  Accordingly, the U.S. District Judge in this case, Arthur J. Schwab simply had no power or authority to issue this opinion.  Indeed, the opinion itself will have no legal effect beyond the case before the court.  Indeed, inexplicably, after writing an elaborate opinion finding the deferred action program unconstitutional, Judge Schwab then gives the defendant an opportunity to withdraw his guilty pea in order to consider if he would want to apply for the very program the judge found unconstitutional.

Why them would Judge Schwab, a Bush appointee, issue such an opinion?  The ultimate action by the court could have been accomplished very simply.  The court could simply have ordered that in light of the pending Executive action, the defendant could consider whether to withdraw his guilty plea and leave it at that.  The fourteen pages of the opinion which analyze the President's action in light of the Doctrine of Separation of Powers simply had no bearing on the court's ultimate action.  This leads to the inescapable conclusion that Judge Schwab issued this opinion for purely political reasons.

And thus, we are left with the ultimate irony in this case.  In order to find that the President violated Separation of Powers, the judge himself had to violate Separation of Powers and issue an opinion on a topic over which he had no jurisdiction.
Posted by Pappy at 7:56 PM