So, those much more intelligent people in Newtown have determined that we "peons" aren't smart enough or responsible enough to own an AR-15.

Knew this would eventually happen...We should sue for concrete information and evidence as to what really happened in Sandy Hook 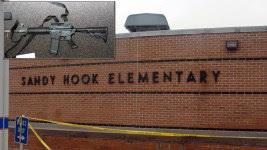 AP
The families of nine of the 26 people killed and a teacher injured two years ago at the Sandy Hook Elementary School filed a lawsuit against the manufacturer, distributor and seller of the rifle used in the shooting. The negligence and wrongful death lawsuit, filed Monday in Bridgeport Superior Court, asserts that the Bushmaster AR-15 rifle should not have been made publicly available because it is a military weapon unsuited for hunting or home defense. The announcement of the filing came a day after the nation marked two years since the devastating attack.
"In fact, one of the Army's specifications for the AR-15 was that it has the capability to penetrate a steel helmet."
But, in order to do that, you need particular ammunition