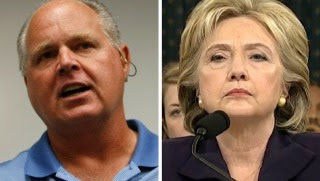 Talk show host Rush Limbaugh warned the American people on Friday that the FBI’s terse announcement that it was reviewing Democratic presidential nominee Hillary Clinton’s emails could be a tactic to divert attention from the significant damage being inflicted on her campaign by the steady onslaught of revelations from WikiLeaks.
Speaking as the initial announcement of the FBI’s action was being made, Limbaugh said he owed it to the American people to present a cynic’s view of Friday’s announcement.
“The cynical view is that [FBI Director James] Comey is still carrying water for Clinton and is trying to get everybody to stop paying attention to the WikiLeaks dump because it’s starting to have an impact,” Limbaugh said.