Another "Treasonous" member of congress....Impeach them all at one time... 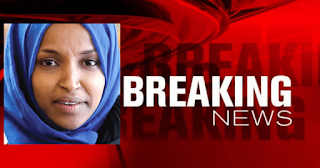 Unlike Obama, President Trump is taking strong actions against our enemies.
He struck back after Iran threatened our people and our allies in the Middle East.

How has the left responded? Did they thank him for preventing another Benghazi? Were they encouraged that a top Iranian leader is gone?

Nope! They actually seemed upset that American lives were spared!

In fact, Democrat congresswoman Ilhan Omar is taking it even further. She made a wild claim about why Trump is defending our people.
From Washington Examiner:

Rep. Ilhan Omar accused President Trump of trying to create a “distraction” by killing Gen. Qassem Soleimani in an attempt to ignite a war with Iran…
READ ON
Posted by Pappy at 6:49 PM