McCarthy on Pelosi: 'Did She Say That With A Straight Face?'
Bronson Stocking Posted: Jan 09, 2020 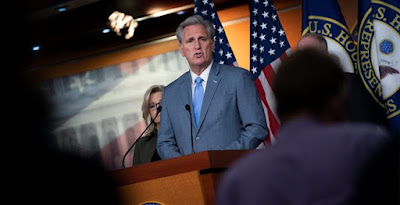 House Speaker Nancy Pelosi (D-CA) is refusing to transmit two articles of impeachment over to the Senate without first seeing from Senate Majority Leader Mitch McConnell what rules will govern the Senate's impeachment trial of President Trump. House Minority Leader Kevin McCarthy (R-CA) was asked by a reporter on Thursday what was so unreasonable about Speaker Pelosi's request.
"Did she say that with a straight face?" quipped Rep. McCarthy.
"You sat through this impeachment," the House minority leader continued. "You watched the Speaker of the House deny any rules going forward in the House. You watched the Speaker of the House change every history we have when it comes to impeachment. We had a history about how we dealt with Clinton and how we dealt with Nixon in a fair process. She changed all that so it could not become fair. She took it out of Judiciary and put it into the Intel Committee ... She denied the own members the ability to ask questions and only for the first 45 minutes that the Chair and someone not even elected to Congress had the power to ask questions. She denied the minority to be able to have witnesses. She denied the accused, the president, to even have legal counsel, and she has the gall to say she wants to determine what happens in the Senate?"
Rep. McCarthy also referenced the recent comments of Sen. Dianne Feinstein (D-CA) who called upon Speaker Pelosi to transmit the articles of impeachment if they were indeed serious and urgent.
"If it’s serious and urgent, send them over," Sen. Feinstein said. "If it isn’t, don’t send it over."
By refusing to transmit the articles of impeachment to the Senate, Pelosi isn't merely requesting something from Mitch McConnell. She's attempting to extort concessions from Senate Republicans. It was recently reported that Speaker Pelosi got the idea after watching John Dean, architect of the Watergate coverup, float the idea during one of his appearances CNN.
Posted by Pappy at 9:07 PM