Maybe Kerry will now get his JUST desserts.... throw in a little extra punishment for his actions in Viet Nam...! Send Hanoi Jane with him...! 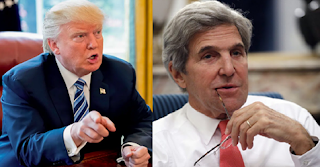 Here’s the only fact we need to know: If you’re a private citizen and you negotiate with a foreign power on behalf of the American government, that’s a crime. It’s called the Logan Act. And John Kerry violated it, plain and simple.

Former Secretary of State Kerry met with Iranian officials last year, which was shady and questionable at best.

In fact, the Boston Globe referred to the meeting between Kerry and Iranian Prime Minister Javad Zarif as follows:

“an aggressive yet stealthy’ mission to apply pressure to the Trump administration to keep the Iran nuclear deal.”

Kerry had no right to be there in the first place. It seems obvious that the former Secretary of State is indeed in violation of the Logan Act.

President Donald Trump knows exactly what happened, and he thinks Kerry should be prosecuted. Immediately. Here’s what Trump told reporters (via Fox News):

“You know John Kerry speaks to them a lot, and John Kerry tells them not to call.

That’s a violation of the Logan Act, and frankly he should be prosecuted on that.”

And what does Kerry have to say in his defense?

Oh, it’s your standard attack on the President, with zero facts to support the rebuttal.

A spokesperson for Kerry offered this lame reply:

Of course, this spokesperson doesn’t say WHY Trump is wrong.

Like most leftists, he just flips out and calls the President stupid, and then attempts to attack his ability to use “diplomacy.” And yet, Kerry himself admitted to meeting with Zarif “three or four times” since leaving office!

Are we missing a step here?

So, Kerry confesses, Trump says he should be prosecuted for breaking government law, then a Kerry spokesperson says POTUS is “wrong.” yeah, that sounds like your standard Democrat argument.

No facts, just scream at the top of your lungs like a seven-year-old pitching a temper tantrum. That’s a liberal for you. But hopefully, Trump will get his way and Kerry WILL be prosecuted. This can’t be allowed to stand!
Posted by Pappy at 2:25 PM