Pelosi needs to be gotten rid of....she can't be allowed to dictate to the president, the senate and the house of reps. She is a "nut case" and now wants to limit Trumps "war powers"....is SHE kidding..?? 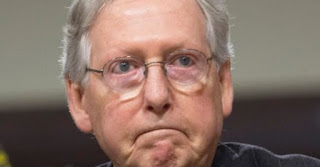 WASHINGTON — Senate Majority Leader Mitch McConnell on Wednesday accused House Speaker Nancy Pelosi of "shameless game-playing" as she reiterated that she does not plan to send the articles of impeachment for abuse of power and obstruction of Congress to the Senate until seeing proposed rules for a trial of President Donald Trump.

The continuing standoff between Pelosi, D-Calif., and McConnell, R-Ky., focused on Trump's conduct toward Ukraine came as the president addressed the nation on hostilities with Iran, a crisis overshadowing the impeachment drama.
READ ON
Posted by Pappy at 7:10 PM