The EPITOME of the meaning of the term, RINO...! 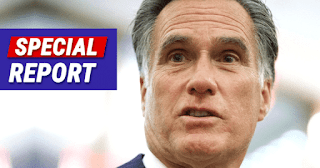 Since then, the man seems to have devolved into madness. Perhaps he’s just jealous that Trump did what he could not do: become president.

He seemed chummy with Trump when he was running for Senate. But once he entered office, he let the mask drop.

Romney just might be another D.C. swamp dweller, eager to please Democrats and the status quo.

He just further proved that theory with his latest statement on impeachment.