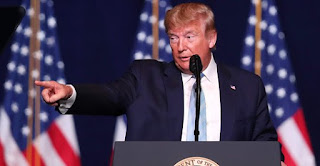 The Democrats have stumbled into yet another beartrap in their unanimous objection to President Trump’s order to kill the world’s leading terrorist, Iranian general Qassem Soleimani. The same misdirected solicitude that caused the Washington Post to describe ISIS leader Abu Bakr al-Baghdadi, after he was driven to suicide by U.S. special operators, as an “austere cleric” has elevated Soleimani to the status of an Iranian General MacArthur.
The Democratic presidential candidates agree that Soleimani was a nasty man, but all the principal active candidates—Joe Biden, Bernie Sanders, Pete Buttigieg, and Elizabeth Warren—have embraced the Obama Administration’s nuclear deal with Iran, in which Iran undertook not to develop a full nuclear-tipped long-range missile capability for 10 years. Under this agreement the United States released approximately $150 billion of frozen Iranian assets, which substantially have been squandered in underwriting the terrorist acts and infiltrations supervised by the late Soleimani—especially by the Iranian-sponsored terrorist organizations Hezbollah in Lebanon, Hamas in Gaza, and the Houthi in Yemen.Apart from being unverifiable, and giving a tremendous stimulus to Iran’s terrorist and other destabilizing activities around the Middle East, the treaty (also ratified by France, Germany, the United Kingdom, Russia and China), only dealt with fissile material, not rocket development or the perfection of a warhead. So Iran’s nuclear military research has continued apace, as it escalated its terrorist activities: a terrible and indefensible agreement the Democrats are now robotically defending.The reimposition of sanctions by the United States has badly squeezed the Iranian economy and its oil exports have fallen substantially. The Iranian economy has partially collapsed and there is immense discontent; months of rioting required very heavy-handed action by the secret police and army to repress. The Democrats who would take Trump’s place have thus very conveniently lined up on the side of the appeasement of Iran, the toleration without reprisal of all Iran’s terrorist outrages, the absolute right to life of the world’s leading terrorist and America’s greatest single enemy.
There could not be a better foreign policy political gift to the president.